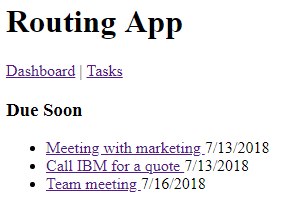 One thought on “Angular vs. React vs. Vue (Part IV: Routing)”